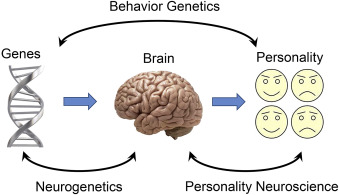 For a long time, nature or nurture puzzle has divided scientists. Some schools of thought believe in genetic determinism as the major responsible for personality traits, and others believe that environmental influence is more important.

In the genetic determinism approach, everything can be attributed to genes and, in turn, to inheritance. But only knowing the sequence of the gene is not enough to explain the complexity of biological phenomena. Genomes can be seen as a blueprint where instructions for the correct development of the organisms are written. In the unfolding of this blueprint of genetic instructions, the interaction of genes with the environment has significant consequences in the expression patterns of the genome. In fact, genes must express themselves in an orchestrated way throughout development, being in many instances environmental clues responsible for triggering or shutting off particular gene expression.

The fact that different genes express in time and tissue-specific manner and the mechanisms that are responsible for this regulation of gene expression can be tremendously complex and in many cases, influenced by the environment, imposes some constraints in the experimental approach to be used. A complex trait like personality is influenced by the combined actions of multiple genes throughout development, making genetic determinism methodology very complicated to realize. Nevertheless, molecular genetics studies have found that there is a correlation between personality disorders and the expression of some particular genes. Psychiatric disorders are etiologically complex, being influenced by multiple genetic and environmental risk factors.

For many years, the twin’s model and adopted child model were the only way to study the inheritance of personality traits in behavioral genetics experiments. It has changed drastically with the introduction of molecular genetics techniques. Broad genome analysis of identified genes correlated with personality disorders or other behavioral traits has not been conclusive (Funder, 2016). Epigenetics modification of genes may account for some personality traits as they affect the expression patterns of particular genes. Correlating epigenetic alterations in specific genes involved in personality traits may shed some light on the complex nature of personality inheritance.

Not all personality disorders come from experience; some of it comes from genes. To study genetics in any personality, special approaches are required. Identical twins are a wonderful insight into personality and inheritance. There are two types of twins;

The monozygotic twins are genetically identical, whereas the dizygotic are genetically different, like two full siblings. Using models with twins in studies, behavioral psychologist developed a statistic called hereditary coefficient—which measures the correlation to a particular personality trait in monozygotic twins, minus the correlation for the same trait in dizygotic twins—times two. Using this coefficient (not only in twins but also in siblings and parent/child comparisons), many personality traits have been linked to an ancestral origin.

Schizophrenia, major depression, panic disorder, generalized anxiety disorder, phobias, alcoholism, and antisocial behavior in adults are just a few. These correlations point out that genes matter and heritability has an important influence on personality. This assumption is new to psychology since the prevailing notion was that all personality traits were determined environmentally, that is to say, a product of early experience and parental practices (Funder, 2016).

Molecular genetics gives a more direct approach to the study of specific genes in personality traits or disorders. For instance, many genes have been characterized to play a role in the well-known dopaminergic or serotonergic pathways, showing a direct relation between genes and brain chemistry (Funder, 2016). Although a correlation may be seen between particular genes and behavior traits, the complexity of any personality trait implies that many, perhaps thousands of genes, may be involved in a complex attribute like proneness to anxiety or sensation seeking, making research cumbersome. Despite the complexity, significant advances are being made in determining the genetics origins of personality and other complex psychological traits.

More from my site